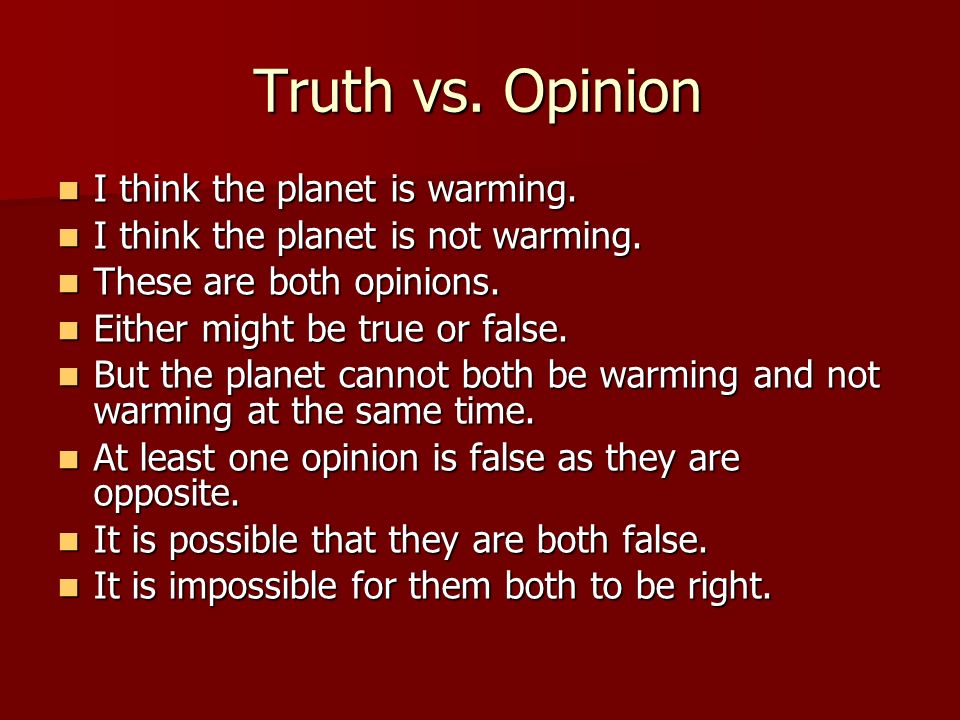 This upcoming election in 2008 seems to be based heavily on faith, religion and moral beliefs more than political or economic issues. It has almost divided this country that once boasted of being undivided in these areas.

Now, more than ever we have encountered new religious beliefs and ideology about what’s right and what’s wrong. Without wanting to offend anyone, the most peaceful conclusion for this mass confusion in the 21st century is to quietly say, “Let’s agree to disagree.” No one wants to be proven wrong in their personal Opinions Vs Truth” . I understand that we can all form a true opinion, but does that necessarily make it truth?

I also think I can safely assume that everyone believes Webster’s Dictionary or Roget’s Thesaurus when it comes to the meanings of words. It’s not my opinion, it’s the truth.

Opinion as described in the Thesaurus means to be persuaded or convinced. To be persuaded means to be enticed, allured, captivated or seduced. Is it just my opinion or do these words describe the works of Satan? Doesn’t he manipulate our minds? Doesn’t he entice us by things we see? The Strong’s Concordance uses the Hebrew word, “Yada” for Opinion. It means to ascertain by seeing.

The Bible says we must walk by faith…not by sight. Satan used sight when he seduced Eve in the Garden. In her opinion, she was convinced that surely she would not die if she ate the fruit. But, we all know how that ended up. Her opinion was not trustworthy.

Are our opinions any different?

In the book of Job, after his grueling encounter with his 3 so-called friends who just knew that Job’s suffering was a result of some unconfessed sin, they all offered their personal opinion on the matter. They prided themselves on their knowledge due to age. They only succeeded in making Job’s situation worse. Job didn’t agree with their opinions.

It’s a good thing because God corrected all of them in the end. There was one young man who stood back and just quietly listened to the other three’s arguments. When all the debating was over, the young Elihu stepped forward. Since he was younger and did not wish to be disrespectful of those who were considered wise because of age, he spoke not his opinion, but God’s truth. (Job 32)

“I thought age should speak, and increased years should teach wisdom. But it is a spirit in man, and the breath of the Almighty gives them understanding. The abundant in years may not be wise, nor may elders understand justice. So I say, Listen to me and I will tell what I think.” Job 32:7-10

Elihu wasn’t merely giving his personal opinion, he was speaking truth by inspiration of God. In order to speak truth by divine inspiration, we need the help of the Holy Spirit. This is the key ingredient when it comes to opinion versus truth. Unless you are a person that lives by the spirit, the truth will seem foolish. It can’t be understood and therefore a personal opinion will be formed, even though it may not be correct.

“But a natural man does not accept the things of the Spirit of God, for they are foolishness to him; and he cannot understand them, because they are spiritually appraised.” 1 Corinthians 2:14

An unbeliever is able to find fault and quickly see the shortcomings of Christians, simply based on personal  Opinion Vs Truth. They can not recognize their true nature as a spiritual person who’s main priority is to serve God. They have been enticed by the world or Satan to be convinced that they are their own god or deserve favor from God by their good works.

How To Cope With An Opinionated Partner ?

Opinion Is a Privilege Not a Right