The Funny History of Haircutting Revealed 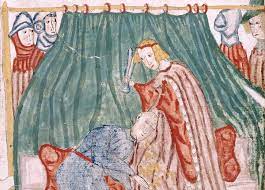 Is Haircutting Difficult? Why & How Should You Cut Off Perfectly Good Hair?

Hair usually grows at a rate of maximum 2cm per month, on the head- unless you are bold. In the past, cave people did not cut their hair. They lacked the tools and the reason to do so. After all, hair and body hair is warming and comforting – unless you have lice crawling in it! Long messy and wild hair can be not only used as a comfortable cushion, but also serves as an excellent method of hiding large sections of an ugly face!

Long hair needs much care and maintenance to keep it tangle free. Since they had no combs, shampoos nor hair-conditioners back then, you can well imagine what an itchy mess their head of hair was. At some point the early man realized it would be far more useful to get rid of the hair, and avoid getting stuck in the bush, while chasing after his pray or woman.

You see, long hair, although beautiful, can be perilous for a man when he’s engaged in a fight or combat, as his enemy can grab him by the hair.

It is also a highly dangerous practice for young girls to have long hair if they ride a bicycle (Therefore, in some caring countries girls are forbidden to ride bikes), or if they go to a school where they might get their hair pulled. We see the reason-ability of some religious demands for cutting off the hair of married women, or of covering up the hair and thus keeping its bearer free of grievous bodily harm.

Adult women who engage in spaghetti-bath combat, a practice rumored to occur in Northern Australian outback, usually prefer to have very short hairstyles or wear a wig.
Nonetheless, long hair is very useful for conservative and worried parents of teen-aged girls, who wish to make sure their child does not sneak out at nights to meet a secret boyfriend; They can simply knot their child to the bedpost using her own hair.

Until our forefathers had figured out how to cut hair, they had to braid, weave or dread-lock (messy knotted hair) their hair. Observing our contemporary siblings with their modern dreadlocks, one immediately connects with an overpowering compulsory desire to quickly learn how to cut hair.

The first known haircutting practices were home-haircutting. Since we have no eye-witness accounts of the methods used to cut hair back then, we must use our good reason and rich imagination;The Funny History of Haircutting Revealed, Most probably the early man tried haircutting using a sharpened stone as the tool of choice, hacking at the hair. This must’ve been the early prototype of the infamous guillotine.

In less technically advanced societies they probably resorted to letting nature handle the hair, by outsourcing the job to wild rats, who chewed some hair off while the hair-afflicted individual unsuspectingly slept on the ground… Or perhaps they had engaged in hair-removal parties also known as hair-pulling (i.e., “unsolicited haircutting”) fights – a nasty habit we haven’t given up upon!

Why You Should Use a Wig