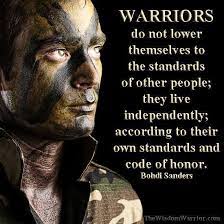 What is the warrior lifestyle?

The true warrior is a rare person in today’s world. He lives life with a different set of values compared with the rest of society. Even those who do share the same values, rarely live a lifestyle which adheres to those values to the extent that the warrior does.Warrior Wisdom – The Warrior Lifestyle To most people, ethics are situational. They make decisions according to what is best for them, instead of what is right. This is not the case with the warrior. The warrior values honor, integrity, justice, and his sense of what is right, above all else. His ethics are not situational; they are his way of life.

The warrior lifestyle revolves around a code of ethics which is non-negotiable.

Those who live the lifestyle of the warrior know that whether or not an action is honorable, is determined by both one’s intentions and the situation at hand. This is not to be confused with situational ethics. The warrior’s ethics do not change according to the situation. His actions will change as needed, but his ethics remain set in stone. There is a big difference between ethics and actions. Ethics determine actions; actions do not determine ethics.

The warrior lifestyle is concerned with what is right and what is honorable.

A warrior’s ethics revolve around these two issues. Justice and honor are foremost on his mind. His thoughts are centered on “what is right,” not on other people’s opinions of what is right. He realizes that many people profess a belief in absolutes which they neither live by, nor truly believe in, when push comes to shove.

The only absolute that the warrior lives by is that of what is right and wrong. If it is not right, he doesn’t do it. He determines what is right and wrong by his strict code of ethics, not some arbitrary laws or the politically correct standards of the day. The warrior doesn’t appear to be honorable; he is honorable. Sincerity is ingrained in this lifestyle. This is a lifestyle that is meant to be lived, not fantasized about or merely discussed.

This lifestyle consist of much more than being trained in the art of war or the art of self-defense, although these are an important part of the life of the warrior. It also consists of the challenge to perfect one’s character. This is a process much like the Japanese concept of kaizen. Kaizen can be translated as constant, never-ending improvement. True warriors try to apply this concept to every area of their life. They seek to balance and improve each area – spirit, mind and body, on a daily basis.

Each area of your life is important and should be kept in balance.

Training men in the art of war or in the art of martial arts, without regard to character, only produces a dangerous man; it does not produce a warrior. In years past, the martial arts masters would not train someone fully until they felt assured of that person’s character. Today most schools will train anyone who can pay, regardless of their character or lack of character. This is dangerous information to give to just any and everyone who comes along. In my opinion, character should be a prerequisite, not only for martial arts training, but for many of the privileges which we enjoy in this country.

I am asked often whether or not I believe that the term “warrior” should apply only to military men and women who have been in war or to trained and experienced fighters. Although I realize this is the literal definition of a warrior, I do not believe that this is the correct definition, not according to the many accounts from past warriors anyway. Warrior Wisdom – The Warrior Lifestyle This literal definition of a warrior is not the definition that is used for our discussion of the warrior lifestyle in Warrior Wisdom. An ape can be trained to throw punches and kick, a dog can be trained to fight, but that doesn’t make either of them warriors. Being a warrior involves more than being trained to fight or being in the military; it involves character training as well. Character training is the true goal of Bushido, the way of the warrior.