Write a Script – Movie or Miniseries? 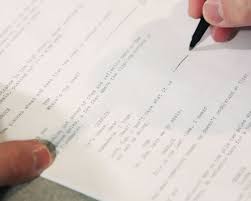 First and foremost as a writer, #1 follow your passion. If you feel your idea/concept would be better served by writing a miniseries than writing a 90 minute movie, I say “go for it” and give it all you’ve got.Write a Script – Movie or Miniseries?

Many writers just have too, too much content to narrow done, right? Too many ideas, too many thoughts, too many words, too many possibilities – welcome to the world of being a writer. No matter what, its about focusing and picking an underlying theme so your main character can exist in a world where you get to tell a story, a compelling story others would want to hear and take part in by watching the story play out on a screen – big or small.

If your calling in life as an aspiring writer leads you to believe you’ve got way too much data in a particular concept to condense down into a 90 minute movie and a miniseries is the direction you decide to go, bear in mind that miniseries are not produced in enough quantity that writers “who can do that” are being sought after.

Remember, as an aspiring writer, you write a spec script as a sample of your work, not so much to get ‘that’ particular script produced. Writers have to write and write they do, many, many scripts, all of which shows their ability to write. It’s not all about the idea you’ve got as a potential movie – lots of great ideas don’t translate to the page – to the screen. Pick your ideas carefully, develop them well, know the craft of scriptwriting and write with the intent to sell (not for validation and praise).

As a writer, and all writers face this, your works-in-progress gets tweaked and tweaked until it becomes a great script. Focusing and finding that one element that can drive your main character through the movie or show is paramount in all writing. Since you’re new at writing I would suggest staying on the road to really hammering out the script you’ve started as a feature – all writing done properly makes you a better writer. If you complete one well written script you’re in a better place to write the 4+ scripts that a miniseries would demand. If you’re a fantastic writer with many, many well written (professionally evaluated for feedback) scripts under your belt then you could pretty much bang out the many scripts needed for a miniseries. But, if you’ve not even completed one well written script, make sure you learn the craft of good writing (that’s not just idea-wise its formatting as well) before you commit yourself to the all consuming arduous task of the demands of multiple scripts.

If your end result is to be recognized as a professional writer then really learning the craft is crucial before spending time, effort, blood, sweat and tears on such a big undertaking as a miniseries.Write a Script – Movie or Miniseries?  It’s your choice though, so follow your inner guidance. Make your thoughts and ideas serve you. Don’t let those thoughts and ideas run the show, dictate – you’re the god for the project and you must make your thoughts serve you NOT be a slave to them or they’ll make folly with you and run you ragged and waste your time.

How to Make a Motivational Mind Movie